KEARNEY, NE. – The Tri-City Storm has announced a four-year contract extension for General Manager Jason Koehler following the organization’s record-breaking 2021-2022 Anderson Cup Championship season. Koehler was hired as the Storm’s Assistant General Manager on August 28th, 2019, and was promoted to his current role of General Manager on November 19th, 2019.

Jason Koehler, of Prospect, Pennsylvania, has managed each of Tri-City’s Regular Season Western Conference Championship rosters over the past two seasons. Prior to joining the Storm before the start of the 2019-2020 season, Koehler was an instrumental part of the building process of three junior hockey expansions teams including one in the USHL as well as rebuilding two dead last place USHL clubs into the most improved teams in the league. He has demonstrated an extremely successful record in finding and managing elite hockey talent. As the General Manager of the Chicago Steel (2006-2008), he managed two future Hobey Baker Award winners on the same roster. He was the first USHL Executive to have two 1st round NHL draft picks in the same NHL Draft (2005). Koehler was the Assistant General Manager during the Youngstown Phantoms’ Tier One USHL record 17-game winning streak, and their Anderson Cup Championship season in 2014-2015. Under his management, teams have had over 400 NCAA DI commitments, and more than 60 NHL Draft picks. He also served as the USHL’s GM Committee Chair from 2017-2019. Koehler’s career began in 1998 as a Coaching Staff Assistant for the Pittsburgh Penguins (NHL). He graduated in less than four years from Robert Morris University with a Bachelor of Science in Business Administration/Sports Management in 2000.

The 2021-2022 Anderson Cup Champion Tri-City Storm team finished the year with the best regular season record in organizational history (47-11-3-1). The ninety-eight points recorded in the standings by this year’s team tied the USHL’s Tier I era (2002-Present) record for most points in a single season. Tri-City’s forty-seven wins set a new team record for most in a single season, and the Storm’s eleven regular losses set a new organizational record for the fewest in a single season. This year’s Storm team won eleven straight games from December 31st, 2021, to February 5th, 2022. The winning streak set a new record for the longest in team history. The 2021-2022 Storm team tied the organization’s record for the longest points streak (thirteen games), and the longest home winning streak (ten games). Tri-City’s twenty-seven home wins this season were the most in the organization’s twenty-two-year history. The Storm also set new records for most home points (fifty-five), and most road points (forty-three) notched in a single season in team history. Tri-City also set new organizational records this season for most goals scored (two hundred and sixty), most assists recorded (four hundred and seventy), and most points recorded (seven hundred and twenty-nine). The Storm also set a new record this season for the highest combined plus/minus rating (+395). Tri-City’s eighty-three powerplay goals this season were the most in a single season in organizational history. The Storm became the first organization in league history to be awarded honors for the Player of the Year, Forward of the Year, Defenseman of the Year, Goaltender of the Year, and Head Coach of the Year in the same season following the 2021-2022 campaign, under Koehler’s management.

“I have been very fortunate to have a career in this business for over twenty years now and these last three seasons and my time with the Storm have been extremely fulfilling, enjoyable, and simply the best of my career. We have an unbelievable ownership group and staff here which makes this job the best in junior hockey in my opinion and I am very excited to remain a member of this organization and continue to bring elite-level teams and players to our fans in Kearney, Nebraska. I want to thank our ownership and Anthony Noreen for their trust in me and their commitment to making the Tri-City Storm the best junior hockey development program in the world. I also want to thank my beautiful wife Jessica for tolerating my passion with this job and her support day in and day out.” – General Manager Jason Koehler

“Jason is a true professional, and deserving of this extension. I feel very fortunate to be able to work with him, and feel that he is as good of a General Manager as there is in junior hockey. He has an elite work ethic, is organized, and is detailed in everything he does. Just as importantly, he is a true friend. I look forward to watching Jason continue to make the Tri-City Storm organization better every day.”- President of Hockey Operations/Head Coach Anthony Noreen 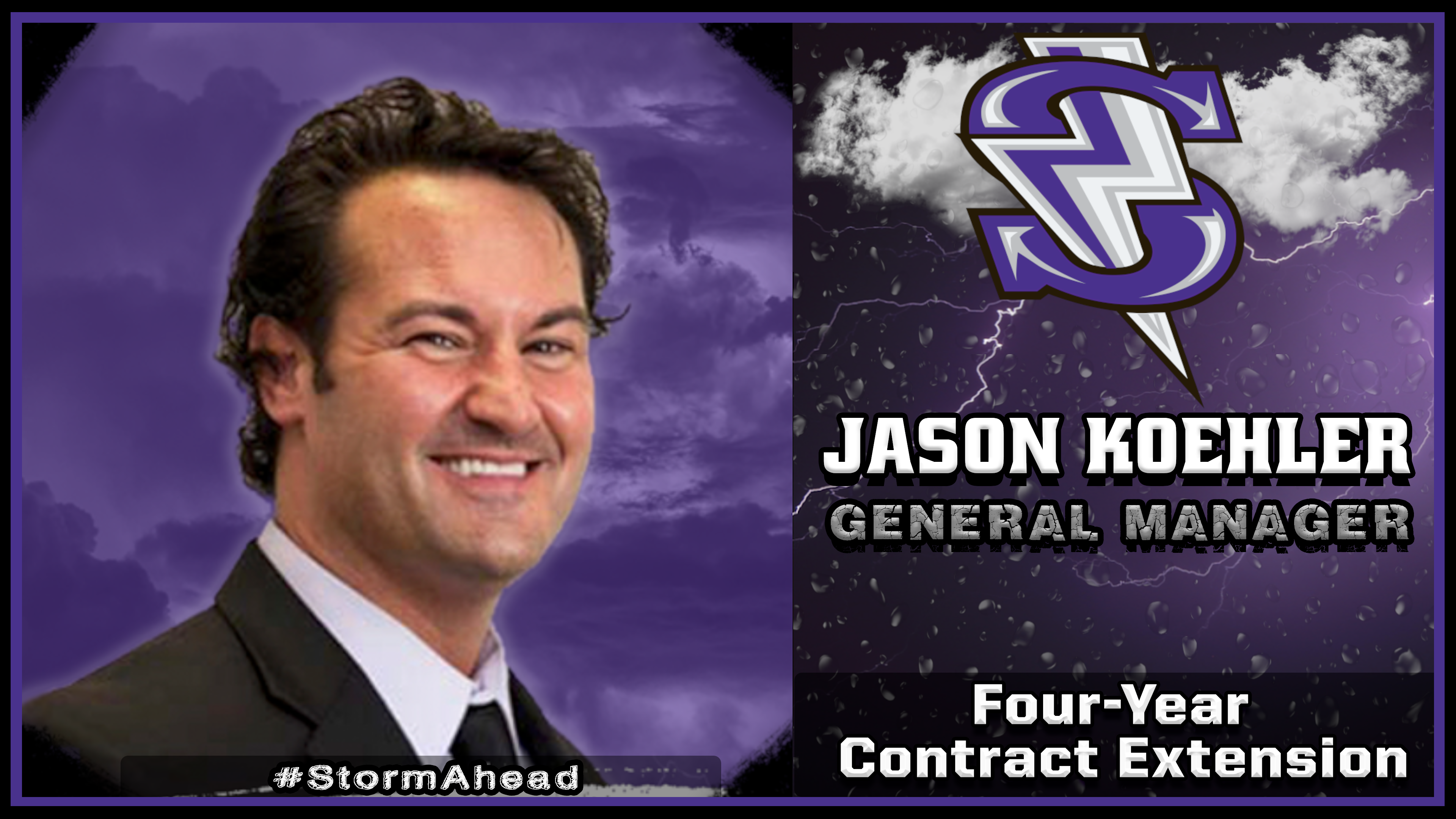