KEARNEY, NE. – The Tri-City Storm completed the first phase of the 2022 USHL Draft on Monday by drafting seven players in the ten-round draft. Tri-City drafted three forwards, four defensemen, and no goaltenders. The Storm also acquired two players through the USHL’s tender process to replace the team’s 1st and 2nd Round picks in Monday’s draft. The Storm signed defenseman Matthew Virgilio and forward Trevor Connelly to a tender agreement in March. Today’s USHL Phase I Draft, formerly known as the “Futures Draft”, was open to 2006 birth year players only. Phase II of the 2022 USHL Draft will begin tomorrow at 10:00am CT and is open to players of all ages who are eligible to play junior hockey next season, and whose rights are not currently protected by another USHL member club. Teams will fill their rosters to a total of forty-five players by the end of the Phase II Draft tomorrow. All veteran roster players from the 2021-2022 season are automatically protected by their current team, separate from the list of forty-five players. Coverage of the Storm’s selections in the 2022 USHL Draft can be found at www.StormHockey.com/2022Draft. The team will also announce each selection on its social media channels (Twitter, Instagram, Facebook) throughout tomorrow’s Phase II Draft.

The Storm signed defenseman Matthew Virgilio to a tender agreement on March 3rd, 2022. Virgilio, 16, of Vaughan, Ontario, appeared in forty-four games during the 2021-2022 regular season for St. Andrew’s College and has scored seven goals. He has also provided the Saints’ offense with seventeen assists for twenty-four total points. Virgilio previously skated for the Toronto Marlboros AAA program in Toronto, Ontario before joining St. Andrew’s College for this season. He previously announced a commitment to play collegiate hockey in the future at the University of Michigan. Virgilio is 5’11’’, 183 lbs, and a left shot.

Tri-City signed forward Trevor Connelly to a tender agreement on March 14th, 2022. Connelly, 16, of Tustin, California, has skated in more than fifty games during the 2021-2022 season for the Long Island Gulls and scored more than thirty goals. He has also provided the Gulls offense with over twenty-five assists. Connelly previously skated for the Anaheim Jr. Ice Dogs AAA program in Anaheim, California before joining the Gulls this season. Connelly appeared in sixty-seven games during the 2019-2020 season for the San Diego Saints AAA organization in Le Mesa, California. He scored eighty-seven goals and recorded fifty assists for one hundred and thirty-seven total points for the Saints during the 2019-2020 season. Connelly is 6’0’’, 161 lbs, and a left shot.

Tri-City’s first selection during Monday’s USHL Phase I Draft was 56th overall in the 4th round. The Storm drafted defenseman Alex Bales with its opening pick of the draft. Bales, 15, of East Amherst, New York, skated for Kent School (CT) during the 2021-2022 season. He scored one goal and notched ten assists in twenty-eight games played. Bales previously skated for the Yale Jr. Bulldogs (CT), and Buffalo Jr. Sabres (NY) programs. Bales skated in four games for Team White at the 2021-2022 USA Selects-15 tournament. Bales is 5’10”, 170lbs, and a left shot.

Ihnat Pazii was the Storm’s next selection in the USHL Phase I Draft. Tri-City drafted Panzii 75th overall in the 5th round. Pazii, 15, of Kharkov, Ukraine, skated for the Anaheim Jr. Ice Dogs (CA) AAA program during the 2021-2022 season. He was the first forward selected by the Storm in Monday’s draft. He scored forty-one goals and notched twenty-six assists for the team. His sixty-seven total points led all Ice Dogs players this season. Pazii won a Silver Medal in the 2021-2022 Under 18 World Junior Championship’s (D1B) Division with Ukraine. Pazii is 5’9”, 150lbs, and is a left shot.

The Storm selected defenseman Ryan Kroll eight picks following Pazii. He was drafted 89th overall in the 6th round of the Phase I Draft. Kroll, 16, of Plainfield, Illinois, skated for the Chicago Mission (IL) during the 2021-2022 season. He scored four goals and recorded twelve assists for the team this season. Kroll previously played for the Chicago Fury (IL) AAA program before joining the Mission this season. He skated in four games for Team Forest at the 2021-2022 USA Selects-15 tournament. Kroll is 5’11”, 179 lbs, and is a left shot.

Brandt Dubey was drafted by the Storm two picks following Kroll. Dubey, 16, Defenseman, of Orchard Park, New York, skated for the Buffalo Jr. Sabres (NY) AAA program during the 2021-2022 season. Dubey notched five assists for the Jr. Sabres’ offense. He skated in four games for Team Red at the 2021-2022 USA Selects-15 tournament. Dubey is 6’1’’, 161 lbs, and a left shot.

Dallas Vieau was the second forward to be selected by the Storm in Monday’s Phase I Draft when the team drafted him 91st overall in the 7th round. Vieau, 16, of Duluth, Minnesota, skated this season for Hermantown High (MN). He scored seventeen goals and notched thirteen assists for thirty total points. He previously played for the Hermantown Bantam (MN) AA and Minnesota Blades (MN) AAA programs. Vieau scored two goals and recorded one assist in four games played for Team Columbia at the 2021-2022 USA Selects-15 tournament. Vieau is 6’0’’, 165 lbs, and a left shot.

The final forward drafted by the Storm in Monday’s Phase I draft was Joseph Delaurentis. Delaurentis was selected 124th overall in the 9th round of the draft. Delaurentis, 15, of White Plains, New York, scored fifty goals and notched forty-three assists in seventy-six games played this season for the Westchester Express (NY) AAA program. He was the team’s leading scorer. Delaurentis scored three goals in four games played for Team Columbia at the 2021-2022 USA Selects-15 tournament. He is 6’0’’, 160 lbs, and a left shot.

Alex Visnappu was the final player drafted by Tri-City in the 2022 USHL Phase I Draft. Visnappu, 16, Defenseman, of Albany, New York, skated for Bishop Kearney Selects (NY) AAA program during the 2021-2022 season. He scored seven goals and recorded twenty-seven assists in sixty-nines games played this season. He is 6’0’’, 160 lbs, and a right shot.

“At the conclusion of today, after a season of hard work from our entire staff - we are very happy with the results of today's draft. We had to wait a few rounds to get involved (we started in the 4th) due to the tender signing process of two elite 2006 born players who will be with us next season (Virgilio and Connelly) and a previous trade (Daimon Gardner), but we would not change a thing with those acquisitions for next season and the near future. Once we got involved in the draft today - we felt comfortable with our preparation and selected a number of talented young men that will be major contributors here in the near future. The players we selected are not only gifted young men, but players that are coming from winning organizations and coaches we respect and who we also know play "playoff style hockey" and will fit into the style of play and culture of what we have built and expect here and will continue to make us an elite level organization in the USHL and in all of junior hockey.”- General Manager Jason Koehler

Signups for the Storm’s 2022 Futures Camp at the Las Vegas Ice Center are underway. The Futures Camp is open to 2007 and 2008 birth year players only. The camp will include four on-ice sessions, off-ice seminars, two games, one team practice, and one position specific practice. Those wishing to participate in Tri-City’s Futures Camp can register online at www.StormHockey.com/FuturesCamp. Signups for the Storm’s Goaltender Camp and Selection Camp will open up on Wednesday following the 2022 USHL Phase II Draft. These camps are invitation-only. Registration information and camp invitations will be sent out following the USHL Drafts. Contact General Manager Jason Koehler at jkoehler@stormhockey.com for more information. #StormAhead 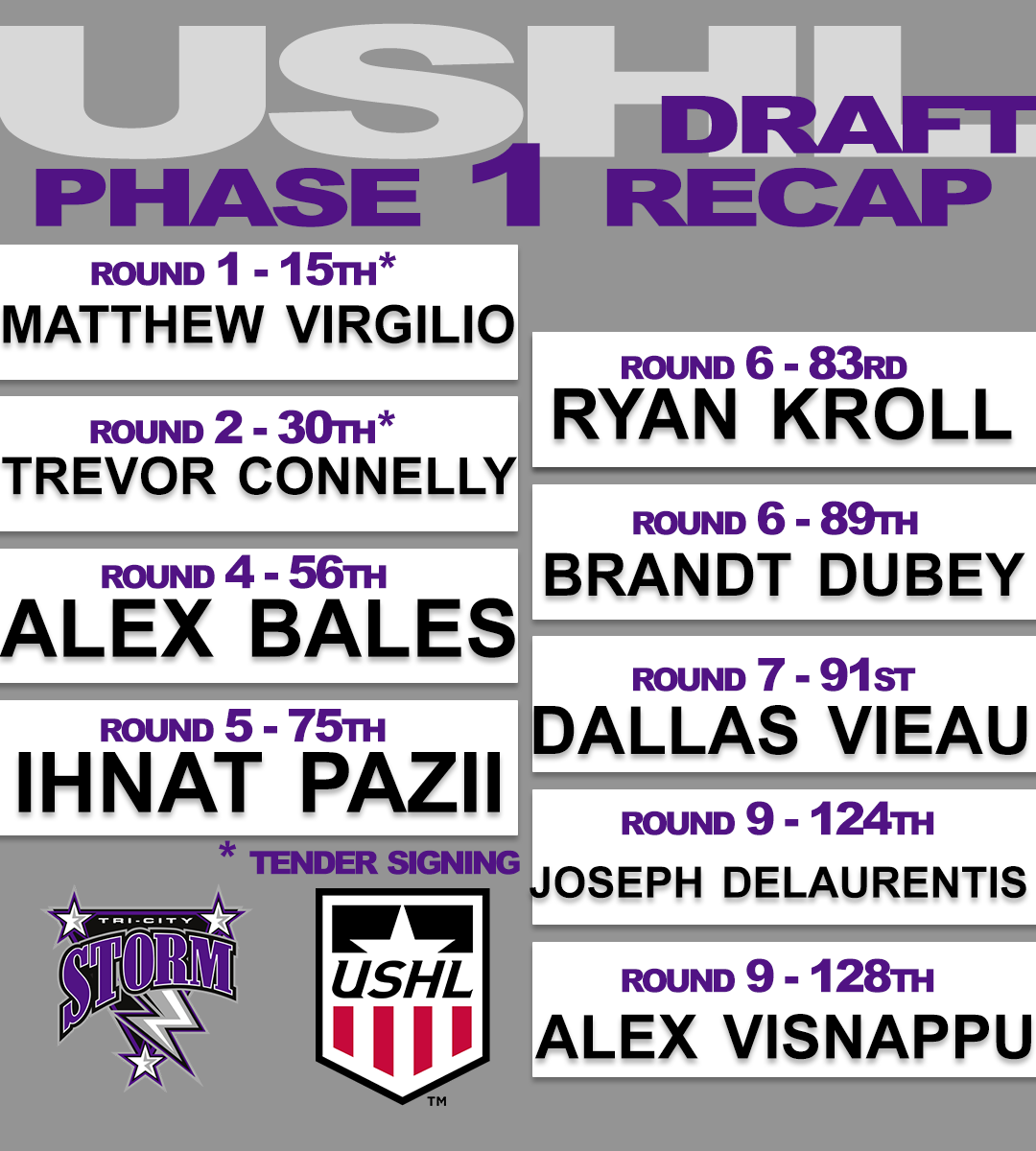 Tri-City made seven selections in the opening day of the 2022 USHL Draft.