RALSTON, NE. – The Tri-City Storm advanced to the 2022 Western Conference Final Sunday afternoon after completing a two-game sweep of the Omaha Lancers in the Conference Semifinals Round of the Clark Cup Playoffs. The Storm posted a 4-0 road shut out of the Lancers on Sunday following a 7-4 win at the Viaero Center on Saturday night. Tri-City won the first two games of the best-of-three series to advance to the next round of the postseason. Ilya Nikolaev (2), Dane Dowiak, and Lleyton Roed scored the Storm’s goals in the victory. Arsenii Sergeev posted his first-career postseason shutout after turning away all 17 of Omaha’s shots on net.

Ilya Nikolaev netted his team-leading third goal of the postseason at 6:22 of Sunday’s 1st period to give Tri-City a one-goal lead in the game. Cole O’Hara and Mitchell Miller each notched an assist on the scoring play. The Storm outshot the Lancers 11-5 in the 1st period, and the 2nd period began with Tri-City leading 1-0.

Ilya Nikolaev scored in the opening two minutes of Sunday’s 2nd period to put Tri-City ahead by two goals. Nikolaev’s goal was netted at 1:42 of the period and was assisted by Jeremy Wilmer. Dane Dowiak scored a powerplay goal at 9:52 of Sunday’s 2nd period to give Tri-City a 3-0 lead. Jeremy Wilmer and Matt Basgall each notched an assist on the scoring play. The Storm outshot the Lancers 14-2 in the 2nd period, and carried a three-goal lead into the 3rd period.

Lleyton Roed scored the only goal of Sunday’s 3rd period with less than six minutes to play. The goal was Roed’s first of the postseason, and was assisted by Cole O’Hara and Graham Gamache. Shots on goal were 8-8 in the 3rd period, and the Storm outshot the Lancers by an overall margin of 33-17 in the matchup. Tri-City completed the two-game sweep of Omaha with a four-goal shutout victory.

Tri-City now awaits the winner of Game #3 of the Western Conference Semifinal matchup between the Sioux City Musketeers and Waterloo Black Hawks to face in the next round of the postseason. The decisive game between the Musketeers and Black Hawks will be played Tuesday at the Tyson Events Center in Sioux City, IA. Puck drop for the game is scheduled for 7:05pm. The winner will advance to play Tri-City in Game #1 of the 2022 Western Conference Final at the Viaero Center on Friday night. Puck drop for Game #1 and Game #2 of the Conference Final series at the Viaero Center is scheduled for 7:05pm CT.

For the latest information regarding the Tri-City Storm, skate to www.StormHockey.com. #StormAhead 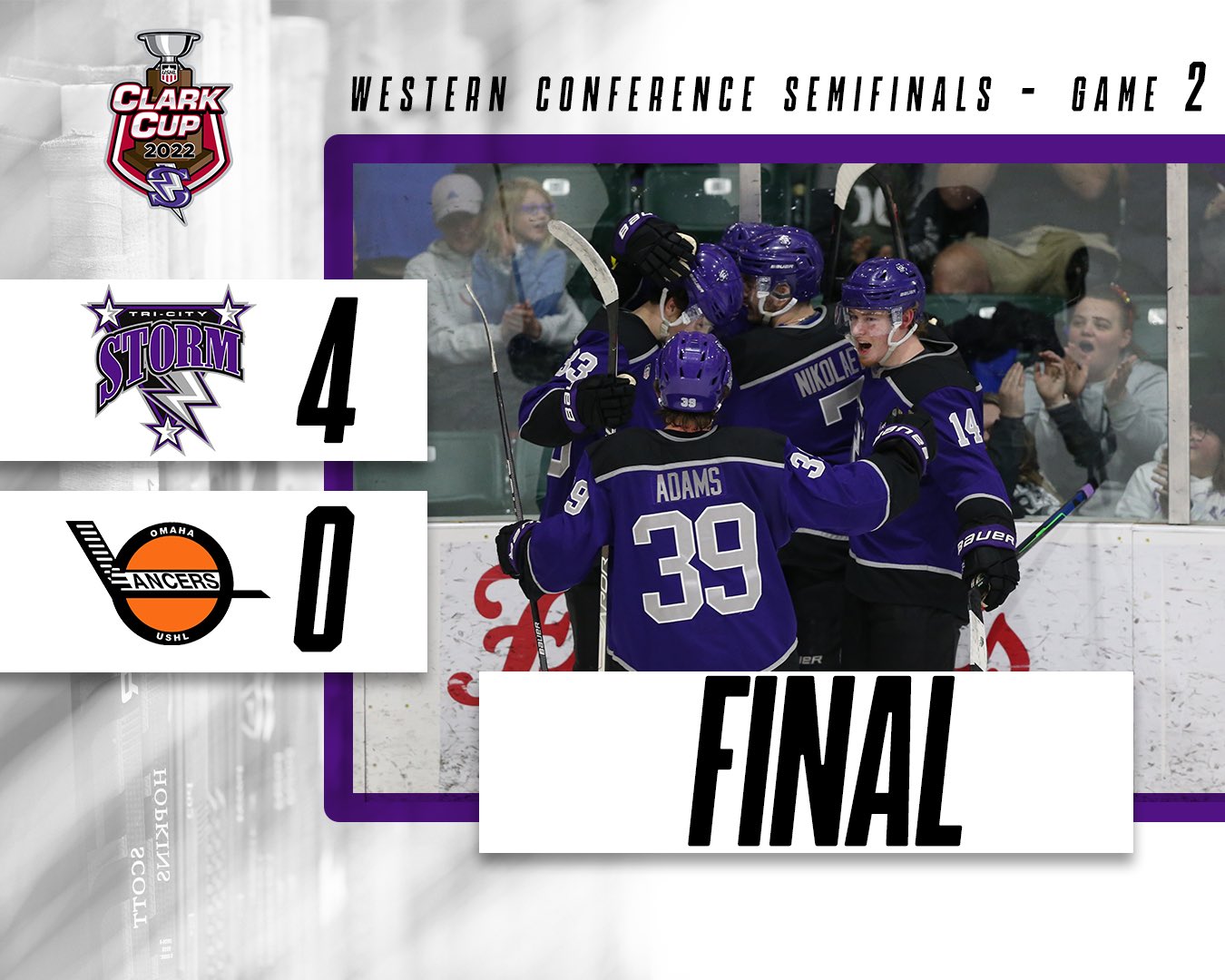