KEARNEY, NE. – The Tri-City Storm tied an organizational record by capturing the team’s 45th win of the regular season in Tuesday’s 8-3 home victory over the Fargo Force at the Viaero Center. The 2021-2022 Anderson Cup Championship team tied the 2018-2019 Anderson Cup Championship team as the only teams in the organization’s twenty-two-year history to record 45 wins in a single season. The win also gave this year’s team a new organizational record for most home wins notched in the standings during a single regular season (26). Dane Dowiak (2), Vinny Borgesi, Mitchell Miller, August Falloon, Jeremy Wilmer, Cole O’Hara, and Matt Basgall each scored goals in the game for Tri-City. Sebastian Wraneschitz recorded his 12th victory of the season in net for the Storm.

Jeremy Wilmer netted the Storm’s lone goal of the 2nd period to increase Tri-City’s lead to four goals. Wilmer’s goal was netted at 1:37 of the period and was his 24th of the year. Cole O’Hara recorded his second assist of the game, and 47th assist of the year on the scoring play. Fargo answered back with a goal scored by Tanner Walos in the final minute of Tuesday’s 2nd period. The goal was netted unassisted and was his third goal of the year. Fargo outshot Tri-City 12-9 in the 2nd period, but trailed 5-2 entering the 3rd period.

The Storm netted three unanswered goals in the opening six minutes of Tuesday’s 3rd period to take a commanding 8-2 lead in the game. Dane Dowiak scored his second goal of the game, and 15th goal of the year forty-two seconds into Tuesday’s 3rd period to give the Storm a 6-2 lead. Mitchell Miller notched his 43rd assist of the year on the scoring play. Cole O’Hara scored seconds later to give Tri-City a five-goal lead in the game. O’Hara’s goal was his 25th of the year and was assisted by Jeremy Wilmer. Wilmer’s assist was his third of the game, and 71st of the season. Matt Basgall scored his 9th goal of the season on the powerplay at 5:44 of Tuesday’s 3rd period to give the Storm an 8-2 lead in the contest. Jeremy Wilmer and Dane Dowiak each notched an assist on the goal. Wilmer’s assist was his fourth of the game, and league-leading 72nd of the season. Dowiak’s assist was his 14th of the year. The final goal of Tuesday’s game was scored by Fargo’s Max Smolinski. Smolinski’s goal was his fourth of the year and was assisted by Erik Bargholtz. The goal was scored at 10:01 of the 3rd period and finalized an 8-3 decision in the game.

Fargo’s Louden Hogg reentered the game during the 3rd period after being pulled during the 1st period. Hogg made 13 saves on 16 shots in nearly 21 minutes of playing time. Matej Marinov picked up the loss in net for Fargo after making 13 saves on 18 shots. Sebastian Wraneschitz recorded the victory in net for the Storm and improved to 12-3-1-0 on the season. He stopped 24 of Fargo’s 27 shots on goal to notch the win in goal for Tri-City.

Tri-City now looks ahead to the final home game of the regular season on Friday night against the Lincoln Stars. The game will include $5 Kids Tickets, $10 Adult Tickets, and a Nebraska Lottery Rivalry 4-Pack. The 4-Pack includes four tickets, four hot dogs, two Nebraska Lottery Scratch Off Tickets, and two Buy-One-Get-One Passes to the Kearney Children’s Museum for $40. Friday’s home game will also serve as the organization’s annual “Fan Appreciation Night” game and will include a postgame presentation of the Anderson Cup Championship Trophy by USHL Commissioner Bill Robertson.

Tri-City hits the ice again on Friday, April 22nd, in a home game against the Lincoln Stars. Puck drop is set for 7:05pm CT. For the latest information regarding the Storm skate to www.StormHockey.com. #StormAhead 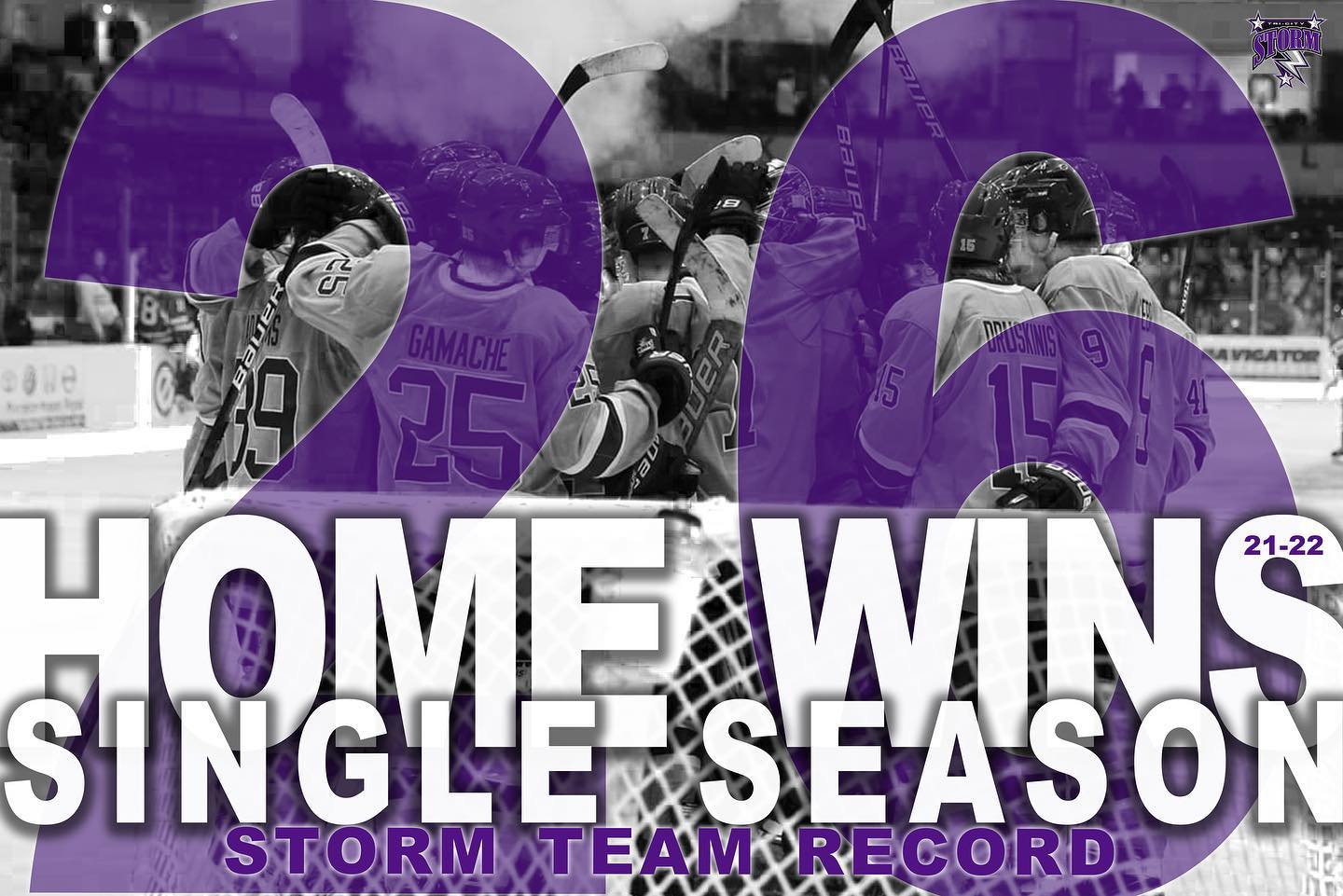