KEARNEY, NE. – Tri-City Storm goaltender Arsenii Sergeev has been named the USHL’s Goaltender of the Week for the second time in his career after backstopping the Storm to a weekend sweep over the Des Moines Buccaneers. Sergeev is a prospect of the Calgary Flames and previously announced a commitment to play collegiate hockey in the future at the University of Connecticut (UConn).

#35 Arsenii Sergeev (6’4’’, 192 lbs) of Yaroslavl, Russia, was solid in his two performances in goal last weekend for the Storm. He posted his third career USHL shutout in a 2-0 victory over Des Moines on Saturday night at the Viaero Center. Sergeev stopped all 22 of Des Moines’ shots in the game. On Friday, Tri-City defeated Des Moines 10-2 with Sergeev recording 21 saves on 23 shots. He posted a Goals Against Average (GAA) of 1.00 for the weekend. His Save Percentage (SV%) the weekend was 0.956%. Sergeev is currently tied with Waterloo’s Jack Williams for the most shutouts recorded by any league goaltender this season (3). Sergeev currently leads the USHL in GAA (1.18) and SV% (.951%). He has posted a record of 10-1-0-0 in net to this point in the 2021-2022 regular season for the Storm.

Sergeev was selected 4th overall by the Storm in the 1st round of the 2021 USHL Phase II Draft. He spent the 2020-2021 regular season with the Shreveport Mudbugs (NAHL). He made twenty regular season appearances in goal for the Mudbugs and posted a 14-4-2 record. He also recorded a GAA of 2.17 and a SV% of .936%. Sergeev also appeared in four games last season for the New Jersey Rockets (NCDC). Prior to joining the Storm organization, Sergeev made his USHL debut on November 15th, 2019, for the Sioux Falls Stampede in a 5-2 road loss to the Sioux City Musketeers. He recorded his first career USHL win in net on September 23rd, 2021, in Tri-City’s 3-2 overtime victory over the Dubuque Fighting Saints at the 2021 USHL Fall Classic. Sergeev was selected 205th overall in the 7th round of the 2021 NHL Draft by the Calgary Flames.

“We played very well as a team last weekend in our two home games against Des Moines. The guys played great in front of me, and I was able to do my job and stop pucks.” – Goaltender Arsenii Sergeev

“I thought overall it was a really good team and organizational weekend. It was a good effort on the ice, we had great support in the stands, and the weekend was highlighted by two great performances by Arsenii.” President of Hockey Operations/Head Coach Anthony Noreen 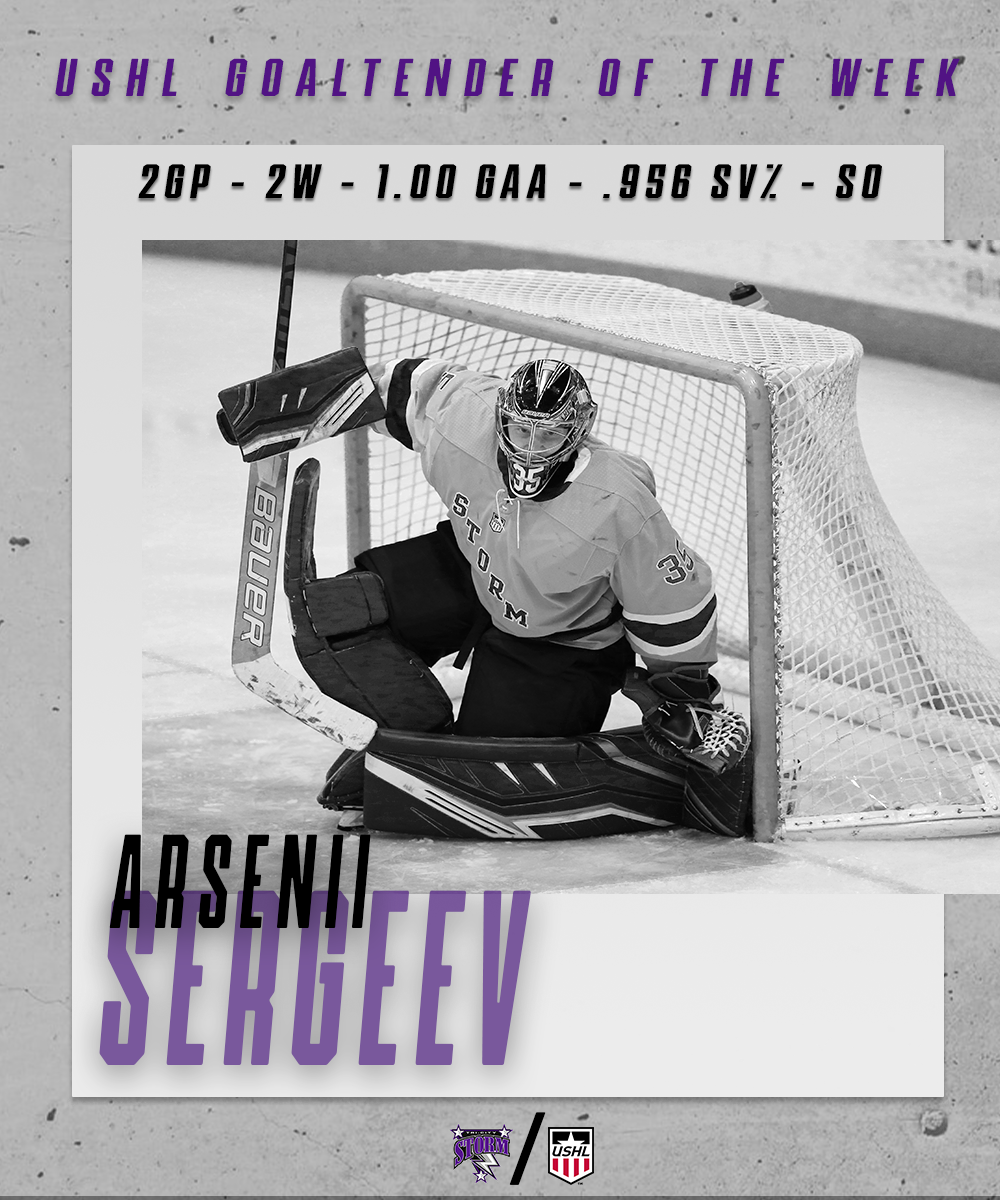