Kearney, NE. – The Tri-City Storm has announced its opening night roster ahead of the 2021-2022 season. The roster includes twenty-seven total players. The roster consists of players on the Storm’s twenty-five-man protected list, affiliate list, and injured reserve. The Storm’s roster is comprised of sixteen forwards, nine defensemen, and two goaltenders. Tri-City’s complete roster can be found online at www.StormHockey.com/StormRoster. The 2021-2022 regular season will be the twenty-second season in the history of the Tri-City Storm organization.

Tri-City begins regular season play Thursday, September 23rd, 2021, at the 2021 DICK’S Sporting Goods USHL Fall Classic in Cranberry Township, Pennsylvania in a cross-conference matchup against the Dubuque Fighting Saints. Puck drop for the opening game of the season is scheduled for 1:30pm CT. Following the game against Dubuque, Tri-City will face the Madison Capitols at 11:00am CT on Friday, September 24th, 2021. After competing in the Lincoln Stars’ Home Opener at the Ice Box on October 1st, the Storm will return home to the Viaero Center for the 2021 Home Opener against the Waterloo Black Hawks. Tri-City led the USHL in average home game attendance during the 2020-2021 season.  Tickets to all Storm home games at the Viaero Center can be purchased by calling the Box Office at 308-338-8144 or by visiting www.StormHockey.com.

President of Hockey Operations & Head Coach Anthony Noreen of Chicago, Illinois, is back behind the bench for his 5th season with the organization. Noreen was hired on May 26th, 2017, as the eighth Head Coach in team history. Noreen’s leadership guided the Storm back to the playoffs in his first season and to its best regular season performance in team history during the 2018-2019 season. The Storm set team records for most wins (45), most points (95), and posted a regular season record of 45-12-3-2. In the postseason, the Storm advanced to the Western Conference Final. Tri-City captured its second Anderson Cup in team history, and Noreen’s second Anderson Cup Championship of his career (Youngstown 2015). In addition to winning his second career Anderson Cup Championship, Noreen was awarded USHL Coach of the Year for the second time in his career (Youngstown 2015). He was the first recipient of the USHL’s Coach of the Year Award in Tri-City Storm history. After no postseason was held for the 2019-2020 season, Noreen navigated the team back to the  Clark Cup Playoffs last season. The team was eliminated in the Western Conference Semifinals. Twenty-two NHL draft picks have played for Noreen during his tenure with the Storm. Noreen has posted a regular season record of 128-74-16-7 (.628%) in two hundred and twenty-two games behind the bench for Tri-City.

General Manager Jason Koehler, of Prospect, Pennsylvania was hired by the organization on August 28th, 2019, and returns for his 3rd season with the Storm. Koehler served as the Phantoms’ General Manager from July 2015 to May 2019 and was on staff in Youngstown for the teams’ Tier I record 17 game winning streak and Anderson Cup Championship during the 2014-2015 season. He was the first USHL Executive to have two 1st Round NHL draft picks in the same NHL Draft (2005). Koehler has had over 350 NCAA D1 commitments and more than 50 NHL Draft picks in his management career. He served as the USHL’s GM Committee Chair from 2017-2019. His career began in 1998 as a Coaching Staff Assistant/Salary Arbitration Assistant for the Pittsburg Penguins. Jason graduated in less than four years from Robert Morris University with a Bachelor of Science in Business Administration/Sports Management in 2000. Koehler was promoted from the role of Assistant General Manager to the role of General Manager on November 19th, 2019.

Assistant Coach Shawn Sramek, of Clarkston, Michigan returns for his 2nd season behind the bench for the Storm after being hired by the organization on September 20th, 2020. Sramek was an Assistant Coach in the Oakland Jr. Grizzlies organization for five seasons prior to joining the Corpus Christi IceRays (NAHL) during the 2019-2020 season. He also served as a Video Coach for the Grizzlies’ 18U AAA team during the 2017-2018 and 2018-2019 seasons. Sramek was the Head Scout & Recruiter for the Lone Star Brahmas (NAHL) for two seasons prior to joining the Corpus Christi IceRays.

Assistant Coach David Nies, of Brookline, Massachusetts, is set to make his regular season debut this week with the Storm after being hired by the organization on August 6th, 2021. Prior to joining the Storm, Nies spent three seasons as an Assistant Coach with the Omaha Lancers. Before joining the Lancers organization in August of 2018, Nies served as an Assistant Coach for the Amarillo Bulls (NAHL) during the 2017-2018 season. Nies played four seasons of college hockey at the University of Southern Maine (NCAA DIII) from 2009-2013. Knies served as a Volunteer Assistant Coach for Southern Maine during the 2013-2014 season and had coaching stints with Ohio University (ACHA), Curry College (NCAA DIII), and Merrimack College (NCAA DI) following his time with Southern Maine.

Assistant Coach Sam Povorozniouk, of Northbrook, Illinois is set to make his regular season debut this week with the Storm after being hired by the organization on September 7th, 2021. Previously, Povorozniouk launched his coaching career with the Windy City Storm. Povorozniouk completed his junior hockey career in the CHL with the Saginaw Spirit (OHL), Kingston Frontenacs (OHL), Windsor Spitfires (OHL), and Saint John Sea Dogs (QMJHL). Povorozniouk signed a professional tryout contract with the Chicago Wolves (AHL) after his time in junior hockey. After his time with the Wolves, Povorozniouk played for the Missouri Mavericks (ECHL) and Elmira Jackals (ECHL) during the 2016-2017 season. He most recently played for Norfolk (ECHL) and Odense (Denmark) during the 2019-2020 season.

Goaltending Coach Matt Zaba, of Yorkton, Saskatchewan, returns for his 5th season with the organization after being hired by the Storm on July 27th, 2017. Zaba coached the USHL's Goaltender of the Year in his first two seasons with the Storm (Filip Larsson 2018, Isaiah Saville 2019). Zaba was drafted 231st overall by the Los Angeles Kings in the 2003 NHL Draft following a junior hockey career in the British Columbia Hockey League (BCHL) with the Penticton Panthers & Vernon Vipers. Zaba played four years of college hockey with the Colorado College Tigers. His professional hockey career began during the 2007-2008 seasons in the ECHL with Charlotte and Idaho. Zaba made his NHL debut with the New York Rangers on January 23rd, 2010, in a road game against the Montreal Canadiens. Following his professional playing career, Zaba served as a Volunteer Assistant Coach at Colorado College during the 2016-2017 season before joining the Storm.

Tri-City’s forward group consists of sixteen players, nine of whom appeared in at least one game for the Storm last season. The sixteen forwards on this year’s opening night roster include one NHL draft pick and ten players who have previously announced a commitment to play collegiate hockey in the future. The group includes two tender signings (Gavin Brindley, 2020 and Tanner Adams 2021). Cole O’Hara led all Tri-City forwards with two goals during the preseason. Parker Lindauer led all Storm forwards with four assists in the preseason. Jeremy Wilmer and Parker Lindauer tied for the most points recorded during the preseason by a Storm forward with four. Cole O’Hara is Tri-City’s leading scorer who returns to the team this season. O’Hara scored eleven goals during last year’s regular season campaign. His seventeen assists and twenty-eight points also led all players last season who are returning to this year’s team.

Tri-City’s defenseman group consists of nine players, seven of whom have appeared in at least one career USHL regular season game. The nine defenseman on this year’s opening night roster includes one NHL draft pick and eight players who have previously announced a commitment to play collegiate hockey in the future. The group includes two tender signings (Vinny Borgesi, 2020 and Andrew Strathmann 2021). Mitchell Miller led all Tri-City defenseman with three goals during the preseason. Mitchell Miller and Mario Gasparini led all Storm defensemen with two assists in the preseason. Mitchell Miller’s five points led all Storm skaters during the preseason. Vinny Borgesi is Tri-City’s leading defensive scorer who returns to the team this season. Borgesi scored two goals during last year’s regular season campaign. His ten assists and twelve points also led all defensemen last season who are returning to this year’s team.

Tri-City’s goaltender group consists of two players, both of whom were selected at the 2021 NHL Draft. Both goaltenders also boast NCAA commitments. Each split games during the exhibition schedule. Tri-City is the only team in the USHL this season to feature two NHL drafted players at the goaltender position. Each of the last two seasons that the league has played a full-length regular season schedule, a Tri-City Storm goaltender has captured the USHL’s “Goaltender of the Year” award.

“Storm hockey is back and we are excited to welcome the best fans in the USHL back to the Viaero Center! The support last season and this offseason has been tremendous. We have a lot to look forward to on and off the ice. Go Storm!”- Tri-City Storm Vice President of Business Operations/Viaero Center General Manager Mike Lucas

“We’re excited about this group we have representing the Tri-Cities and wearing the Storm logo this season. They had a productive offseason which was reflected in our preseason testing and have been receptive to everything we’ve thrown at them so far. The returning players had the luxury of learning from some of the best leaders I’ve ever been around and now is their turn to pay it forward to our newcomers. As a staff we look forward to helping develop this group.”- President of Hockey Operations/Head Coach Anthony Noreen

“We are proud and excited to enter the season with this year's version of the Tri-City Storm. We had a heated battle through training camp and our preseason games and feel confident this version of the Storm is our best product and will be enjoyed by our fans this season with our talent and depth at all positions. We have a strong mix of returning players, USHL experienced veterans, junior hockey experienced players, and young fresh blood that will be ready to play when inserted into our lineup. Thank you to our ownership group for providing us the resources to be a competitive club and we can't wait to kick off the season in Pittsburgh this week before returning home to Kearney to our fans for our home opener on October 8th.”- General Manager Jason Koehler 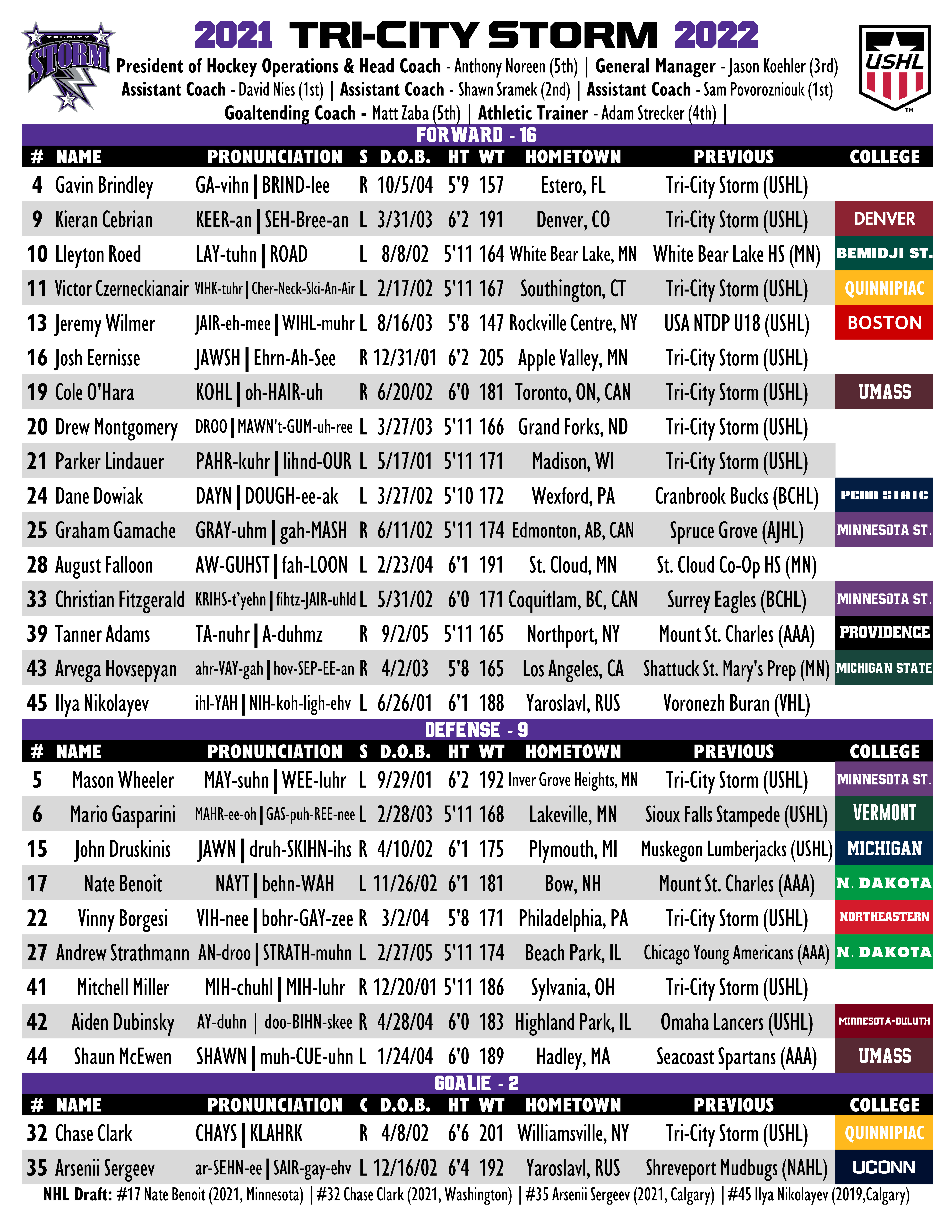