Kearney, NE. – The Tri-City Storm has acquired defenseman Aiden Dubinsky in a transaction with the Omaha Lancers. In exchange for Dubinsky, Omaha has received defenseman Ethan Elias and forward Colin Kessler.

Aiden Dubinsky, 17, of Highland Park, Illinois, skated in forty-nine games last season for the Omaha Lancers. He scored his first career USHL goal on January 3rd, 2021, in Omaha’s 5-2 road loss to the Des Moines Buccaneers. Dubinsky also notched eleven assists during the 2020-2021 season. In addition to his forty-nine regular season games with the team, Dubinsky also skated in both Lancers’ games in the 2021 Clark Cup Playoffs. Dubinsky was the 28th overall pick in the 2nd Round of the 2020 USHL Phase I Draft by the Omaha Lancers. Prior to his time in the USHL, Dubinsky previously skated for the Florida Alliance AAA program. Dubinsky also skated for the Chicago Young Americans (CYA) during his youth hockey career. He previously announced a commitment to play college hockey at the University of Minnesota-Duluth.

Ethan Elias, 18, of Maple Grove, Minnesota, skated in eight games for the Storm during the 2020-2021 regular season. He was selected by Tri-City 151st overall in the 10th Round of the 2019 USHL Phase I Draft. Elias made his USHL debut with the Storm on April 9th, 2021, in Tri-City’s 5-3 road victory over the Lincoln Stars. Before joining the Storm, Elias scored seven goals and recorded twenty-nine assists in twenty-three games played last season for Maple Grove High School (MN).

Colin Kessler, 17, of Anchorage, Alaska, skated in thirty-one games last season for Culver Military Academy’s 16U program in Culver, Indiana. He scored twenty-one goals and recorded sixteen assists for thirty-seven total points. Kessler was selected by the Storm 115th overall in the 8th Round of the 2020 USHL Phase I Draft. Prior to joining Culver Military Academy, Kessler skated for the Anchorage North Stars AAA youth organization.

“I’m very excited to be joining the Storm this season, they have a strong tradition of winning and developing players. It was a great experience to play in the USHL at such a young age last season. As the year went on, I got more accustomed to the pace which allowed me to play with more confidence. I hope to help the Storm win the Western Conference and the Clark Cup this season, and I’m hoping to have a great season with the goal of getting drafted next June.” Defenseman Aiden Dubinsky

“Aiden is a player we got to see first-hand plenty of times last year and what he was able to do as a 16-year-old defenseman in our league was very impressive. Also, the familiarity with Coach Nies and former Florida Alliance teammate Gavin Brindley assured us that he is the type of player that we want in our family and will thrive in our culture and development system.” - President of Hockey Operations/Head Coach Anthony Noreen

“We are excited to announce the acquisition of Aiden Dubinsky to our club. He had a very strong first season in the USHL last year as a 16-year-old defenseman which is not easy, and we expect him to take a big step this season in year two of his junior hockey career in our environment with our staff. There is certainly a comfort level with him as a player after watching him with current Storm forward Gavin Brindley two years ago in AAA hockey (Florida Alliance U16) when they were teammates as well as seeing him firsthand against us in USHL action all season with Omaha. We thank the Lancers for working with us on this trade and the professional communications and negotiations by their Head Coach and GM Chadd Cassidy.” - General Manager Jason Koehler

Season tickets are available now and may be purchased by visiting the Viaero Center Box Office or by calling 308-338-8144. For more information on the Tri-City Storm, skate to www.StormHockey.com! #StormAhead 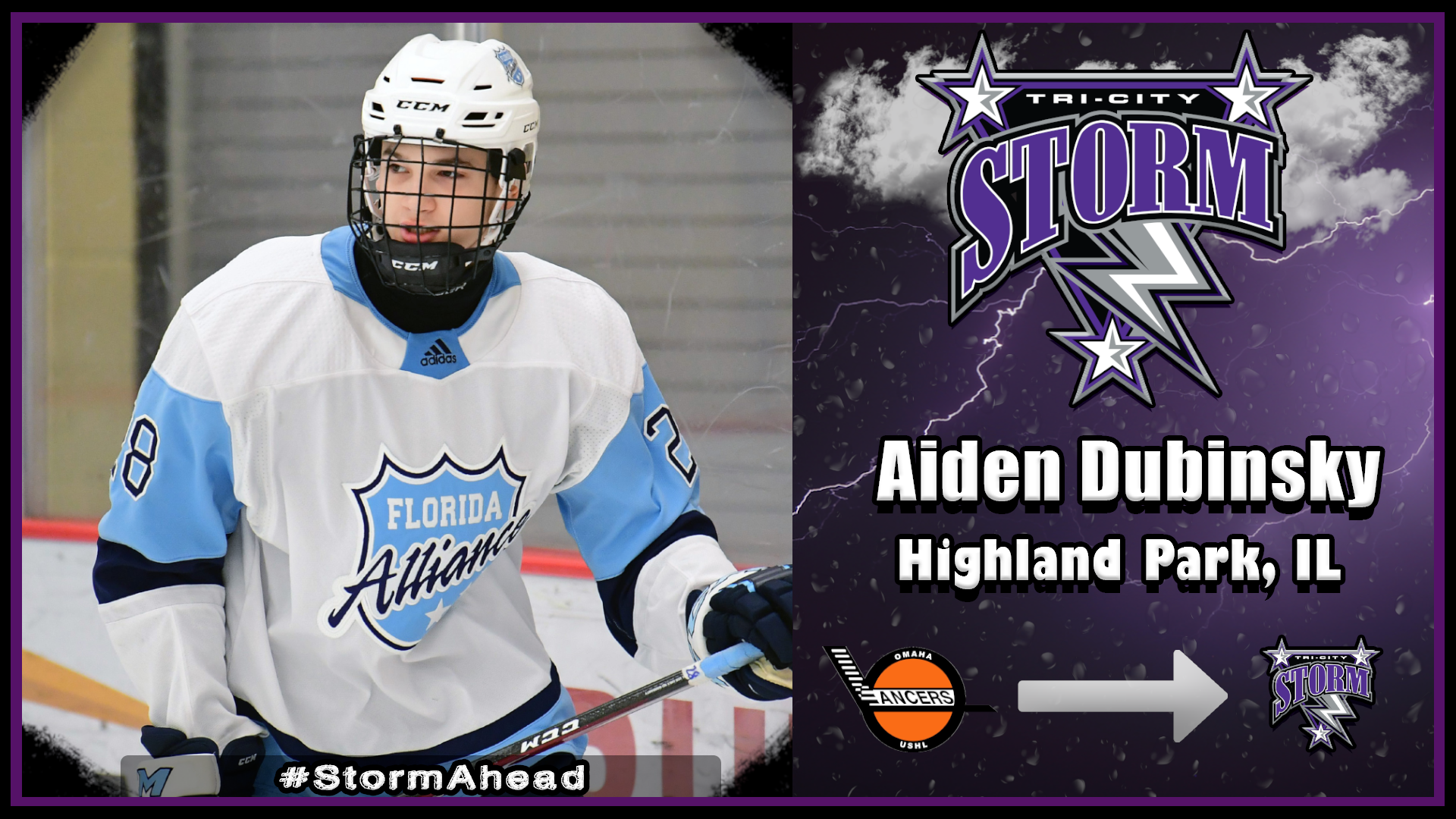