Kearney, NE. – The Tri-City Storm is set to host Game #2 of the Western Conference Semifinals tonight at the Viaero Center following a thrilling come-from-behind 3-2 victory last night in Game #1. Mark Estapa netted the game-winning goal for Tri-City with less than five minutes to play in the 3rd period to give the Storm a one-game lead in the best-of-three series. Tickets are still available for tonight’s home game and can be purchased by calling the Viaero Center Box Office at 308-338-8144 or by visiting www.StormHockey.com. A win in tonight’s game advances the Storm into the Western Conference Final for the second consecutive postseason. Puck drop is set for 7:05pm.

Tri-City (#1 Seed Western Conference, 1-0) accomplished something in last night’s opening game of the 2021 Clark Cup Playoffs that it had not achieved throughout the fifty-two-game regular season schedule. The Storm finished the regular season with a 0-11-0-0 record when trailing after the 2nd period. After Cole McWard scored a power-play goal in the 1st period, Fargo answered back with two consecutive goals in the latter moments of the 1st period and during the 2nd period. With less than nine minutes to play in Friday’s 3rd period, Hunter Strand scored a power-play goal for Tri-City to tie the game at 2-2. A third power-play goal of the game was scored for the Storm by Mark Estapa with less than five minutes to play to give Tri-City a 3-2 victory. The Storm netted four power-play goals in a single game twice during the 2020-2021 regular season (Jan. 2nd @ LIN, Mar. 12th @ OMA) but Tri-City’s three power-play goals scored during last night’s victory over Fargo were the most in a postseason game in the organization’s twenty-one season history. Attendance for Game #1 Friday night at the Viaero Center was 3,125.

Fargo (#4 Seed Western Conference, 0-1) enters tonight’s game at the Viaero Center in a must-win situation following last night’s 3-2 road loss against the Storm in the opening game of the postseason. Jack Peart and Bear Hughes scored the Force’s goals in the game. Fargo’s penalty kill finished the regular season second-worst in the USHL’s Western Conference at 78.5% and was 0 for 3 in last night’s game. The penalty kill was 22 for 27 in the regular season in head-to-head matchups with the Storm. Goaltender Brennan Boynton made 20 saves on 23 shots in goal. Including the three games contested at the Viaero Center during the regular season, Fargo’s only victory in Kearney this season in four games came on November 20th, 2020 in a 5-2 victory. A Force win in tonight’s game would set up a series-deciding Game #3 tomorrow at the Viaero Center. 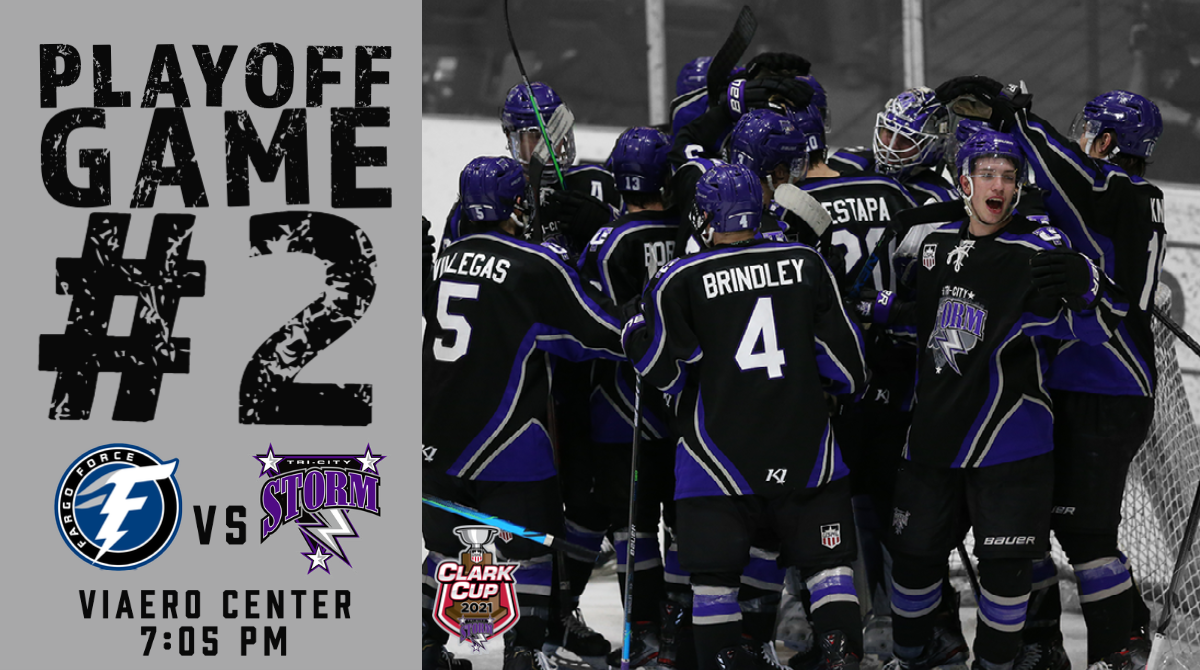