The Tri-City Storm is proud to announce the hiring of Jason Koehler as Assistant General Manager for the 2019-2020 season. 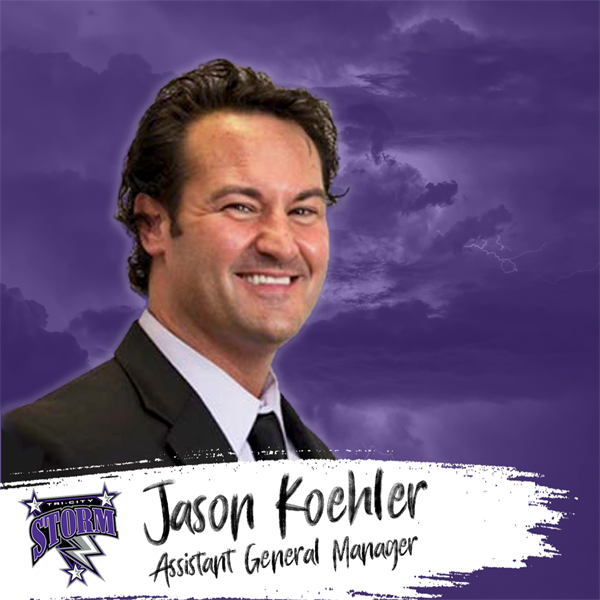 Jason Koehler, of Prospect, Pennsylvania brings an extensive wealth of knowledge and twenty-one years of hockey experience to the organization. Jason was an instrumental part of the building process of three junior hockey expansions teams and has been extremely successful in finding and managing elite hockey talent. As the General Manager of the Chicago Steel (2006-2008) he managed two future Hobey Baker winners on the same roster. He was the first USHL Executive to have two 1st round NHL draft picks in the same NHL Draft (2005). He was the Assistant General Manager during Youngtown’s Tier One USHL record 17 game winning streak, and Anderson Cup Championship season in 2014-2015. Under his management, teams have had over 300 NCAA DI commitments, and more than 40 NHL Draft picks. He served as the USHL’s GM Committee Chair from 2017-2019. His career began in 1998 as a Coaching Staff Assistant/Salary Arbitration Assistant for the Pittsburg Penguins. Jason graduated in less than four years from Robert Morris University with a Bachelor of Science in Business Administration/Sports Management in 2000.

“I’m excited to come to Tri-City, and I’m very fortunate to come to an organization that has had recent success. Coach Noreen and myself have a personal relationship from working together in Youngstown, and I’ve known Steve Lowe for many years from working in hockey. This is a great staff to come be apart of, I’m hoping my addition will bring different viewpoints and different energy to an already successful staff. – Assistant General Manager Jason Koehler

“I’ve known Jason for over ten years, he’s a guy with tremendous work ethic, and someone who brings a difference perspective to our scouting staff. We value his strong opinions, he has a proven track record of making his team better, and I want to thank our ownership group for allowing us to add a person with his qualities to our staff to further expand on our success as an organization” - President of Hockey Operations Steve Lowe

“Jason is someone who I worked very closely with in Youngstown for five years, and I have as much respect for him as I do anyone in the hockey world. He is a consummate professional, who is extremely organized, extremely detailed, and very passionate about what he does. Jason is going to be a tremendous addition to our scouting staff and management staff. Between Steve, Jason, and the rest of our scouting staff, I think this is going to be a group with a ton of experience and an elite work ethic that’s going to continue to help us find and pursue the best players in the world.” – General Manager/Head Coach Anthony Noreen